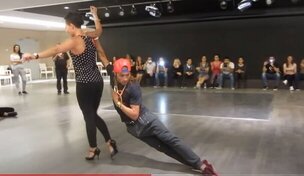 The rapidly growing South African state, Angola has many natural resources including diamond, fossil fuel, gold and a diversity of wildlife.

The country has been under Portuguese colony since the 16th century and got its independence in 1975. Hence the culture of Angola is said to be influenced by Portuguese and the national language is obviously Portuguese. However this piece is designated to one of their fascinating culture Semba. You might have heard about Samba which is a popular dance from Brazil. Well it is said that during the colonial era the Portuguese colonizers took slaves from Angola to Brazil, and so these slaves took the dance of Semba to Brazil. It is said that the dance originated from this African nation, Angola.

Semba is a traditional type of musical genre and dance style. Semba means touch of the bellies which is one of the most recognizable and entertaining movements in Semba.

The other fascinating dance movement I found interesting is the carrying of the male partner. I guess the woman that dance Semba have to be strong.

Semba is not just a music genre or dance style, it is an instrument of storytelling on the everyday life, social events and activities, usually sung in witty lyrics. Through Semba music an artist is able to convey a broad spectrum of emotions. Its adaptability is evident in its presence at funerals, weddings and parties.

Semba is becoming more popular in Angola and around the world today. And I must say I am fascinated by it.